We celebrated the 25th anniversary of our agency at Palau Reial de Pedralbes in Barcelona with a superb evening on March 9th, 2019.

With his extraordinary talent, the Catalan Michelin star chef Nandu Jubany delighted all 120 guests, publishers and friends, who came from all over the world to join us in our celebration.

Mrs. Borràs claimed that “the most powerful thing in the world are words” and that “words have the capacity to make us dream and to make dreams come true”.

Mrs. Sgarbi mentioned that her professional career had also started 25 years ago, when she initially published 50,000 copies of the first Italian edition of The Alchemist in Bompiani, and since then, she has always been linked to Paulo Coelho and Mônica Antunes. According to her, “The most important thing is to have faith in your intuition and not to be afraid”.

Mônica talked about how she met Paulo Coelho when she moved from Rio de Janeiro to Barcelona, the beginning of our agency and the network of publishers that began to grow steadily thanks to friendship and connections, but mainly due to loyalty and perseverance. In her own words, “No one can ever make a dream come true alone”. She thanked everyone for being part of that reality and for joining our 25th anniversary celebration.

Paulo gave the final speech talking about the importance of loving what you do, told personal anecdotes from his visits to Bulgaria and Latvia and thanked all publishers and Sant Jordi Asociados for their trust in him. He remarked, “There is a much more important word than anything else: loyalty”.

TEX, the textile division of Carrefour, developed a capsule collection of T-shirts and pyjamas with Paulo’s quotations and brand for France. It will be launched in June.

Check out some of the items in this collection below.

Paulo Coelho posts a video on his Twitter account showing support to the Italian population affected by the Covid-19 situation.
https://twitter.com/paulocoelho/status/1238139918255153152?s=20

The Portuguese municipality of Oeiras inaugurates a bronze bust made by Russian painter and sculptor Gregory Pototsky honouring Paulo Coelho. The sculpture can be visited free of charge in the garden of Palácio dos Anjos.
https://br.sputniknews.com/cultura/2020030915312563-escritor-paulo-coelho-e-homenageado-em-portugal-com-escultura-de-artista-russo/

Paulo Coelho: I was tortured by Brazil’s dictatorship. Is that what Bolsonaro wants to celebrate?

Paulo Coelho has written a bold and courageous statement for the Washington Post recounting the detention and torture he suffered during the military regime in Brazil in the 70s. The revelation of these difficult and personal events has had an enormous impact in Brazil.

Paulo Coelho is the author of “The Alchemist” and “Hippie.” He was a songwriter for musicians like Raul Seixas and Rita Lee.

May 28, 1974: A group of armed men breaks into my apartment. They start going through drawers and cabinets – but I don’t know what they’re looking for, I’m just a rock songwriter. One of them, more gentle, asks that I accompany them “just to clarify some things”. The neighbor sees all this and warns my family, who immediately panic. Everyone knew what Brazil was living at the time, even if it wasn’t covered in the newspapers.

I was taken to the DOPS (Departamento de Ordem Politica e Social), booked and photographed. I ask what I had done, he says they will ask the questions. A lieutenant asks silly questions and lets me go. From that point on I’m officially no longer in prison – so the government is no longer responsible for me. When I leave, the man who took me to the DOPS suggests we have coffee together. He stops a taxi and gently opens the door. I get in and ask to go to my parents’ house – they need to know what happened.

On the way, the taxi is blocked by two cars – a man with a gun in his hand exists from one of the cars and pulls me out. I fall to the ground, and feel the barrel of the gun in the back of my neck. I look at a hotel in front of me and think, “I can’t die so soon.” I fall into a kind of catatonic state: I don’t feel afraid, I don’t feel anything. I know the stories of other friends who have disappeared; I will disappear, and the last thing I will see is a hotel. The man picks me up, puts me on the floor of his car and asks me to put on a hood.

The car drives around for maybe half an hour. They must be choosing a place to execute me – but I still don’t feel anything, I’ve accepted my destiny. The car stops. I’m dragged out and beaten as I’m pushed down what appears to be a corridor. I scream, but I know no one is listening, because they are also screaming. Terrorist, they say. You deserve to die. You’re fighting against your country. You’re going to die slowly, but you’re going to suffer a lot first. Paradoxically, my instinct for survival begins to kick in little by little.

I’m taken to the torture room with a raised floor. I stumble on the raised floor because I can’t see anything: I ask them not to push me, but I get punched in the back and fall down. They tell me to take off my clothes. The interrogation begins with questions I don’t know how to answer. They ask me to betray people I have never heard of. They say I don’t want to cooperate, throw water on the floor and put something on my feet – then I see from underneath the hood that it is a machine with electrodes that are then attached to my genitals.

Now I understand that, in addition to the blows I can’t see coming (and therefore can’t even contract my body to cushion the impact of), I’m about to get electric shocks. I tell them they don’t have to do this – I’ll confess whatever they want me to confess, I’ll sign whatever they want me to sign. But they are not satisfied. Then, in desperation, I begin to scratch my skin, tearing off pieces of myself. The torturers must have been frightened when they saw me covered in my own blood; they leave me alone. They say I can take off the hood when I hear the door slam. I take it off and see that I’m in a soundproof room, with bullet holes on the walls. That explains the raised floor.

The next day, another torture session, with the same questions. I repeat that I’ll sign whatever they want, I’ll confess whatever they want, just tell me what I must confess. They ignore my requests. After I don’t how long and how many sessions (time in hell is not counted in hours), there’s a knock on the door and they put the hood back on. A man grabs me by the arm and tells me, embarrassed: it’s not my fault. I’m taken to a small room, painted completely black, with a very strong air-conditioner. They turn off the light. Only darkness, cold and a siren that plays incessantly. I begin to go mad. I have visions of horses. I knock on the door of the “fridge” (I found out later that was what they called it), but no one opens it. I faint. I wake up and faint again and again, and at one point I think: better to get beaten than to stay in here.

I wake up and I’m still in the room. The light is always on, and I’m unable to tell how many days or nights went by. I stand there for what seems like eternity. Years later, my sister tells me my parents couldn’t sleep; my mother cried all the time, my father locked himself in silence and did not speak.

I am no longer interrogated. Solitary confinement. One fine day, someone throws my clothes on the floor and tells me to get dressed. I get dressed and put on my hood. I’m taken to a car and thrown in the trunk. We drive for what feels like forever, until they stop – am I going to die now? They order me to take off the hood and get out of the trunk. I’m in a public square filled with kids, somewhere in Rio but I don’t know where.

I head to my parents’ house. My mother has grown old, my father says I shouldn’t go outside anymore. I reach out to my friends, I look for my singer – nobody answers the phone. I’m alone: if I was arrested, I must have done something, they must be thinking. It’s risky to be seen with a former prisoner. I may have left prison, but prison stays with me. Redemption comes when two people who were not even close to me offer me a job. My parents would never fully recover.

Decades later, the archives of the dictatorship are made public and my biographer gets all the material. I ask why I was arrested: a complaint, he says. Do you want to know who reported you? I don’t. It won’t change the past.

And it’s these Years of Lead that President Jaír Bolsonaro –after referring in Congress to one of the most heinous torturers as his idol– wants to celebrate on this March 31.

Here is the link to the article: https://www.washingtonpost.com/opinions/2019/03/29/paulo-coelho-i-was-tortured-by-brazils-dictatorship-is-that-what-bolsonaro-wants-celebrate/?utm_term=.0988edb79e49

A number of editions of Hippie, Paulo Coelho’s new book, have already been published worldwide in 42 languages. Check out what the international press is saying about the novel:

“A narrative of initiation full of turns and fantasies.”
France, Le Parisienne

“Sweeps away the readers with a powerful force.”
Hungary, HVG

“A new story that reminds us that writing from the heart is the best way to communicate in all languages. And to live eternally.”
Spain, Elle

“Combining the eastern point of view and the conceptual terminology of the west; you can not drop this book from your hands for a very long time.”
Turkey, Cumhuriyet

“Paulo Coelho, a gift to the literary world from Brazil, tells a story of the journey of being.”
Turkey, Hurriyet

“Hippie is precisely the antidote for all those who are already tired of living and of enduring the blows of a more and more dehumanized society. A new vision of the hippie movement.”
Spain, Todo Literatura

A study on young people who share their Catholic faith on social networks and on their influencers—carried out by the online Christian publication Aleteia—places Brazilian writer Paulo Coelho as the world’s second-most influential person among young people interested in religion and values worldwide, falling in only behind Pope Francis. 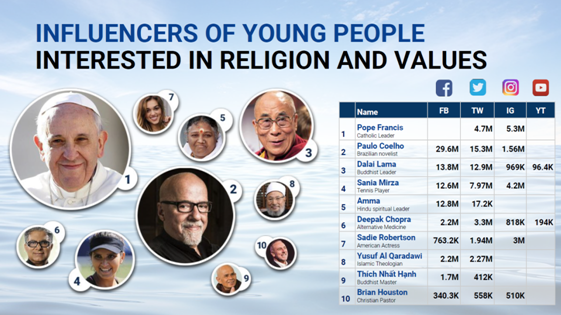